Tokyo, February 7, 2013 - Fuji Heavy Industries Ltd. (FHI), the maker of Subaru automobiles, today announced that it will exhibit the "SUBARU VIZIV CONCEPT" as a world premiere at the 83rd Geneva International Motor Show (Press day: March 5 and 6; Open to the public from March 7 through 17, 2013). In addition, FHI will introduce the world premiere of the Subaru Outback carrying the Subaru Boxer Diesel with Lineartronic (CVT). It will also exhibit the all-new Subaru Forester to make its European show debut.
The Subaru press conference is scheduled at 9:15am on March 5th. 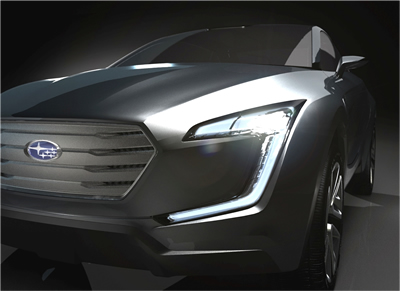 ◆ SUBARU VIZIV CONCEPT
"SUBARU VIZIV CONCEPT" represents a direction of new designs and new technologies enhancing the Subaru brand into the future. It is a future-generation crossover concept embodying the brand value of "Enjoyment and Peace of Mind". The "VIZIV" model name is a coined word inspired by the phrase "Vision for Innovation". It expresses a future vision for innovation, and a concept car suggesting the brand's direction.
The special site opens today at 11:00 on the Subaru Global Site.
http://www.subaru-global.com/ms2013/geneva/
The site will feature information updates relating to the Geneva International Motor Show including Subaru's press conference.

◆ All-new SUBARU FORESTER
The all-new Forester will be displayed along with technical exhibits. The model won the highest rating in the latest 2012 European New Car Assessment Programme (Euro NCAP)* safety performance test.
* Euro NCAP is an independent agency composed of European governments and European motoring and consumer organizations. It has been assessing new car safety performance since 1997.

Year 2013 marks the 55th anniversary of Subaru brand. FHI will express the Subaru brand's history and future vision through the exhibition of the "Subaru 360" launched in 1958 and the latest concept car "SUBARU VIZIV CONCEPT".

Handing of photos and press materials

Photos and press materials provided on the downloadable page may only be used for press purposes.

We use our own and third-party cookies to improve your experience and our services, by analysing browsing on our website.
By continuing to browse, we understand that you accept our use of them. To find out more about the cookies we use (and to see how to disable them), visit our Privacy Policy.